Is e-scooter startup Bird worth $2 billion? Yes but only if it can do something most other B2C mobility companies cannot 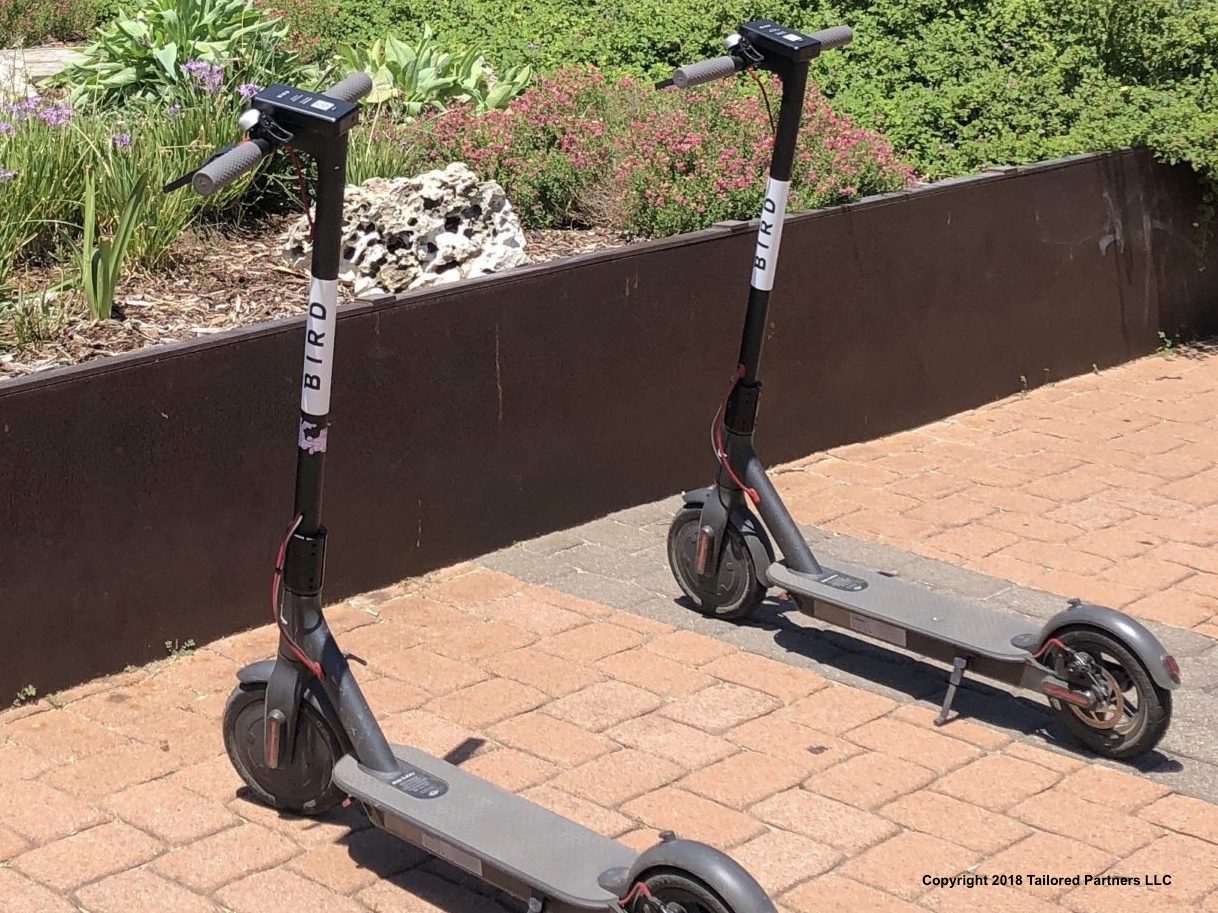 Neil Portus is a freelance CFO & Advisor for growth companies at Tailored Partners and a former Vice President & Equity Analyst at Goldman Sachs in New York where he covered car rental and mobility stocks.

* Visit our store to download a free copy of this Excel financial model for an e-scooter startup.

* This article was also published by Autonomy.Paris in its Urban Mobility Daily newsletter. 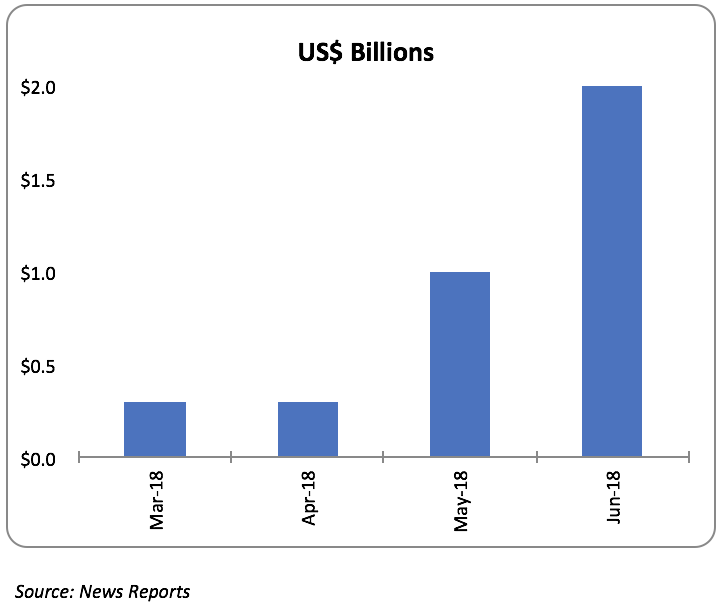 I had the same question too. So, I delved into the numbers and, to my surprise, realized that I was indeed able to reach a $2 billion valuation. I even built my own three statement financial model for a hypothetical e-scooter startup.

However, to reach $2 billion, I had to make one critical assumption which contradicts both my experience as a consumer of mobility services and my time as a Wall Street equity analyst covering car rental and mobility stocks. It’s something which I think is the Achilles heel of most B2C (business-to-consumer) mobility services such as ride hailing, car sharing, car rental, peer-to-peer car sharing, carpooling and bike sharing:

They have no pricing power.

Put another way, my perspective is that most B2C mobility services have no consistent ability to raise prices while simultaneously growing their market share. Pricing power is one way a company’s customers can demonstrate their brand loyalty. However, I believe that consumers view many of these mobility services as commodities with no material difference in the service or product offering from one company to the next. As a result, I often observe that a primary avenue for a competitor to capture market share is to step-in and undercut on price. With customers ready to jump ship as soon as a cheaper, viable alternative emerges. Further compounding the problem can be sector dynamics which lead to supply exceeding demand thereby putting additional pressure on pricing. During my work as an equity analyst, I observed US car rental companies over-suppyling the market for a variety of reasons: a pursuit of market share at the expense of profits; holding on to older cars longer so they don’t have to sell them during a period of declining used car values; and free cancelations and fluctuating seasonal demand which made it difficult to optimize fleets.

I’m sure you’ve heard of the adage “Better, Cheaper, Faster” with the tagline that, as a consumer, you can have two but not all three. However, as a mobility consumer, I consistently want to get places better, cheaper and faster:

* I find myself often booking the airline offering the lowest fare. Years ago, I would spend over $1,000 in the summer to fly round trip from New York City to Europe while, this year, I spent approximately $750 on new low-cost, long-haul airline Norwegian Air;
* For years, I booked rental cars on Priceline in search of the lowest bidder; and
* Several years ago, like many New Yorkers, I swapped the city’s yellow cabs for an Uber and, more recently, Lyft — as new mobile technology provided a cheaper, more convenient alternative.

One arena where I have observed pricing power is with monopolistic mobility services like New York City’s CitiBike. They are better positioned to raise prices and increase market share. Notably, annual CitiBike memberships have risen in cost to $169 currently from $95 in 2014 when the service launched.

With all of this in mind, I set out to build a financial model to see if I could:

(1) Value a hypothetical e-scooter startup at $2 billion; and
(2) Show what impact a lack of pricing power could have on that valuation.

First, I essentially backed into a $2 billion valuation and, while lofty, discovered that the assumptions are not unbelievable when broadly compared to Uber. In year one of my hypothetical e-scooter startup, I assume the business has a healthy start and adds 500,000 new recurring users resulting in an average of 250,000 users for the year who take three rides per month at an average total price of $2.50 per ride. This yields $22.5 million in annual revenue (250,000 average users x 3 rides per month x 12 months x $2.50 total price). Bird’s pricing is $1.00 (fixed) plus $0.15 per minute (variable) which I mirror and assume each ride is 10.0 minutes to reach a total price per ride of $2.50 in the first year. Next, if net revenues have an average net growth rate of 105% for the next 5 years, the company will generate $815 million in revenues at the end of its sixth year ($22.5 million x 2.05^5). At a 6 times revenue multiple, the business will have an enterprise value of $4.9 billion which, if discounted back five years at 20% and assuming the company has no debt, yields a present equity value of $2.0 billion ($4.9 billion / 1.20^5). This illustration is more simplified than my model but shows the growth needed.

Chart 2: Reaching a $2 billion valuation for my hypothetical e-scooter startup 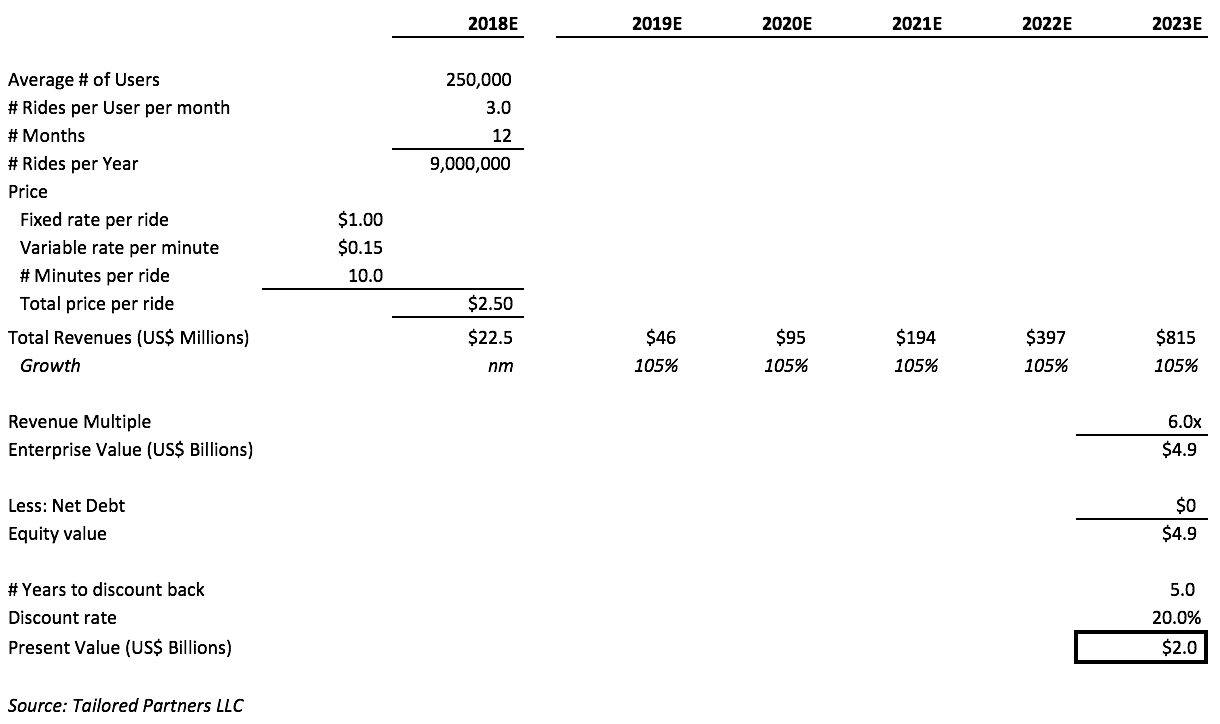 Testing two additional scenarios: Because there is limited data on the number of recurring users (i.e., someone who routinely uses the service, say, 3 times per month as I’ve assumed above) Bird has added during its first year of operations, I tested two additional scenarios noting that Google Play shows over 500,000 Android downloads and the Apple App Store shows over 185,000 iPhone reviews for Bird’s app (not everyone leaves a review so this indicates a higher number of downloads). However, just because someone downloads the app does not mean they are routinely using the service. That said, if my hypothetical e-scooter startup ends its first year with 1.0 million or 1.5 million new users (versus the 500,000 assumed above) who use the service 3 times per month at a total price of $2.50 per ride, then the annual net revenue growth rates needed to reach a $2 billion valuation using a 6 times revenue multiple are approximately 80% and 65% respectively.

These assumptions are lofty but investors are making a big bet. For an early mover in a disruptive service and a group of investors looking to get in on the ground floor, they are not unbelievable to me. I compare them to news reports that Uber raised $258 million in August 2013 at $3.7 billion valuation about five years after it was founded. This followed Uber achieving year over year net revenue growth of over 800% in both the first and second quarters of 2013 right before the raise. While I don’t know Uber’s forecasted forward net revenue number at the time of the raise, this valuation was 7.5 times Uber’s 2014 actual net revenue of $495 million.

Second, though I fully anticipate that the lion’s share of revenue growth will come from adding new users rather than price increases, I wanted to show what impact a lack of pricing power could have on valuation (i.e., if the price per ride is lower than expected). As illustrated above, revenues in my model are driven by three metrics: (1) number of users; (2) number of rides per user per month; and (3) total price per ride (which is a function of rate x time). In my model which scaled to a $2 billion valuation based on 500,000 new users added in year one, one of my assumptions was that the fixed and variable rates would grow 10% annually from year one’s pricing of $1.00 per ride (fixed) plus $0.15 per minute (variable). By keeping the length per ride constant at 10.0 minutes, this meant the total price per ride grew from $2.50 in year one to $4.03 in year six. So, I held all assumptions constant (including the length per ride) and tested the impact on valuation of a reduced growth rate in the price per ride. I found that, for every 1% annual change in growth rate for the fixed and variable price rates, valuation increased or decreased by roughly $90 million (the impact per percentage point decreases as rates are lowered and increases as they rise). So, if the fixed and variable rates grew at 5% annually rather than 10% as initially modeled, this 5% decrease knocked off approximately $420 million (or approximately 21%) from valuation in my hypothetical e-scooter startup model. If you want to test your own assumptions and draw your own conclusions on pricing power, please visit our store to download a free copy of the model.

Chart 3: The impact on valuation from lower than expected price per ride 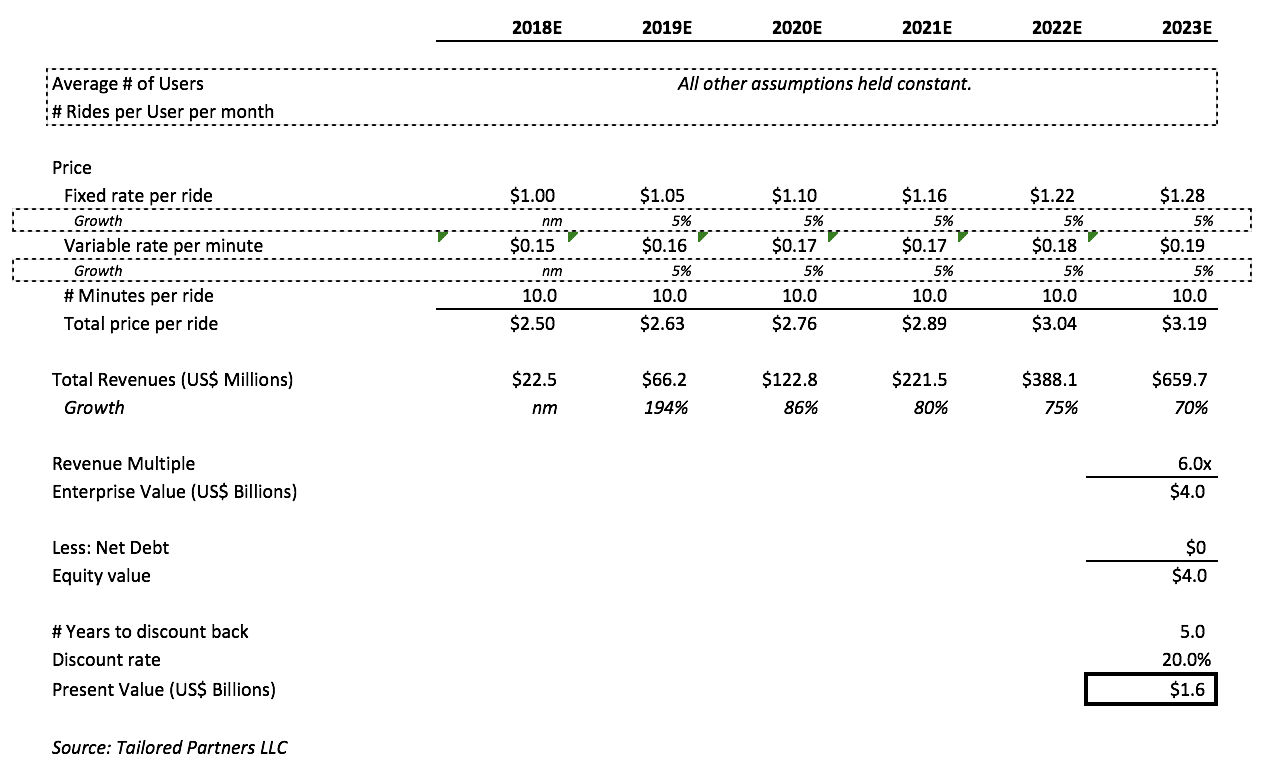 So, while I now better understand the bet Bird’s investors are making, I think the fly in the ointment for B2C mobility investors remains. If Bird can navigate early structural headwinds (i.e., scooters are illegal in some cities while others are impounding them or capping their numbers) and execute well, its success will attract even more competition whose primary path to build market share will be to deliver a similar experience while undercutting on price — with consumers ready to switch brands to take up this new offer. With news reports indicating that competitor Lime recently completed its own big raise of $250 million at a valuation close to $1 billion, able competition is already present.

I see this as a sector where few companies demonstrate long-term pricing power, and missing the mark by even a few percentage points will sour the investment case for most investors.

Neil is a CFO & Advisor for growth companies and the Managing Partner of Tailored Partners, a boutique advisory firm. He is a former lead equity analyst at Goldman Sachs in New York where he helped to lead numerous transactions including Zipcar's $1.1 billion IPO. He is a CFA charterholder and a Certified Management Accountant.